6 Reasons Why Sincerity is Important to Providing Excellent Patient Care 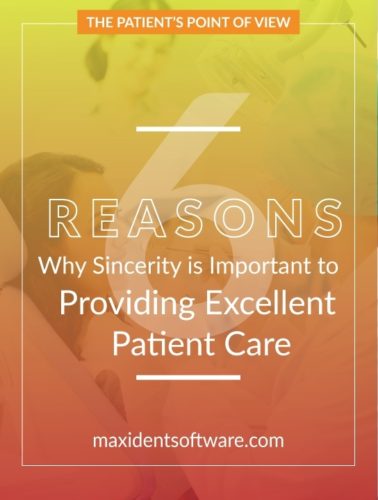 If you really want to become more empathetic, you must start with one crucial ingredient– sincerity. Being sincere actually has some sway on your patient’s decisions and in this article, I am going to defend the position that sincerity is the remedy to horrid customer service. In fact, even when your patients are at their worst, sincerity can guarantee that they continue to come to your office, despite their mood.

But first, if you’ve been keeping up with the goings on in America, you know that Charlotteville suffered a devastating blow that occurred on Friday, August 11th and 12th when a white supremacist and Nazi rally resulted in a terror attack that killed one and injured many more. After the President remarked that the blame should be “on both sides,” and did not denounce the racists and bigots of the rally directly, it was time for damage control. A lot of GOP senators, Democratic senators, late night talk show hosts, and companies came down hard on the president for his remarks and put pressure on him to make a new statement on Monday.

He did. Unfortunately, he was reading from a script and everyone could see that, despite the words he was saying, he wasn’t being sincere. How did everyone know that he was being insincere? You can’t script sincerity.

Here is what matters– whether you’re running a business, a practice or you’re the President of the United States, faking sincerity can potentially do a lot of damage to that business, that practice, or your presidency in ways you never thought possible. Not only can it damage your bottom line and the trust people have in you, but it can thoroughly and irreparably damage your credibility and authority in your position. Faking it has consequences as people tend to catch on pretty quick. Fake sincerity by the President was almost immediately pointed out by late night talk show hosts, Stephen Colbert and Seth Meyers. Stephen Colbert said about the statement that it was “clearly written by somebody else” and Seth Meyers said, “you could tell it was a statement he didn’t really want to give by the way he rigidly read off a script.”

Fake sincerity is basically a house of cards. It’s not stable, it will be noticed and possibly pointed out, and will, at some point, come tumbling down.

Be sure that everyone you work with and everyone who is meant to connect with the customers is practicing sincerity in every aspect of their job. Sincerity is not only crucial to customer service and patient care, but to your bottom line as a business, your credibility as a Dental professional, and your authority in the dental field. If you or anyone in your office is faking sincerity, this should be quashed immediately. Below are even more reasons why sincerity is so important to your practice and the way the colleagues in your office interact with your patients.

1 – Lack of sincerity = Lack of empathy

A lack of sincerity means a lack of empathy. What do I mean by this? Empathy is your ability to feel what another person is feeling and understand what’s going on with them in order to address the issue. But how can you do any of that if you are not being sincere in your efforts to listen and understand? The core ingredient in being more empathetic is sincerity. So, it is doubly important to be sincere in every aspect of patient care and customer service. How can you properly help a customer if you don’t care about the issue or them? The short answer– you can’t.

Even in the case of bad reviews, you can one-eighty a negative review or even conversation by being sincere in your response. If one of your patients had a bad experience, it’s always more business savvy to confront that bad experience head on with the patient and together find out how best to resolve it. If the bad review has made you angry, take a moment to breathe and collect your thoughts before putting them into words.

3 – Sincerity gains loyalty; the opposite is true too

Before I gush further regarding sincerity, it’s best to let you know that, though sincerity guarantees loyalty and trust, the exact opposite is also true. According to the article, You Can’t Script Sincerity In Customer Support, “The bottom line is that insincerity is a loyalty killer. And, while they may put up with it, customers shouldn’t have to deal with a customer support rep who is scripted, apathetic, and isn’t customer-focused.”

4 – Being sincere means you care

I know that when I’m receiving service I like to know that the person taking care of me actually cares. And in a profession like Dentistry, it isn’t just recommended, it’s required. If I think for one second that my Dental Professional doesn’t care, I won’t stick around. Patients have a right to make a decision regarding their health based on the type of care provided by the Dental or Health Professional. And if the perception your patients get is that you don’t care, there is a good chance they won’t be coming back.

5 – Sincerity is the remedy to bad customer service practices

As someone who has been in a customer service position for a couple decades now, it’s easy to see where customer service can go spectacularly wrong. Our own company boasts of superior customer service and that is what we strive to provide at every available opportunity from the first-point-of-contact being the Customer Service Rep, to the Support Technician, Account Manager, and the Implementation Specialist.

When the Customer Service Representative responds to a client, she is sincere in her effort to help them. They don’t know it, but even when she’s not on the phone, she is working with tech support to provide solutions and make sure calls are being answered in a timely manner.  What she says isn’t scripted, it isn’t rehearsed, it’s real. Genuine. It is her sincerity that allows her to empathize with that client and provide them with the tools they need to get back up and running as soon as possible. That is how it should always be. I started both CSR’s with a simple script to get them accustomed to it, but I also trained them to improvise, get to know and engage with the customers, and make them feel comfortable enough to let their guards down and be open about their issues. This can’t be achieved without sincerity.

In response to sincerity, your patients just like our customers will inherently trust and open up to you in ways you never thought possible. When it comes to sincerity, the best way to truly understand the impact it has is to relate it to a moment when you were a customer or a patient and answer these questions honestly (whether to yourself or in our comments section below):

How often, in person or on the phone, have you dealt with someone in a customer service position that somehow quelled your anxiety and frustration with a sincere smile or tone?

Were you able to immediately pinpoint whether they were being sincere or not? How did you know?

What actions do you take to make sure that you and your staff are practicing sincerity with patients all the time on the phone and in the office?

Sincerity breeds a positive work environment and relationship between you, your patients and your staff and should be utilized as often as possible. For more information, more articles and some funny videos, check out the links below and I hope you enjoyed the week.